President Donald Trump, a man who is famously particular about his appearance, is fully embracing doing a dad dance to the Village People’s YMCA as the finale to his rallies in the campaign’s closing stretch. Trump ’s rally dance has become a rare moment of levity in an otherwise miserable campaign year marked by a deadly pandemic, an economic recession and racial turmoil.

And while Trump has largely been shunned by pop culture, the dance has spawned a viral TikTok video challenge (even though he’s threatened to ban the site in the U.S.) and a parody on “The Late Show with Stephen Colbert.” Then order ‘Dancing with The Don’t and let President Trump teach you all the hottest moves!” Colbert’s show advertised in a parody infomercial.

Trump campaign adviser Jason Miller agreed to reveal the secret to an AP reporter “only if we first get a clip of you singing YMCA.” President Trump has drawn heat form stars such as Bruce Springsteen, the Rolling Stones and John Poverty for using their songs before his rallies, but one composer has no problem with it.

“The parody has gone super viral,” he told The Post, adding that more than 10 million people have watched five videos he and his group, The American People, have made showing Trump supporters dancing to the tune. In one video, the Los Angeles-based artist has superimposed photos of other politicians, including Democratic presidential candidate Joe Biden, and Vermont Sen. Bernie Sanders, onto the bodies of the Village People in their original music video.

Shivers claimed the song was responsible for defusing a clash between Black Lives Matter demonstrators and Trump supporters in Los Angeles in August. The parody’s opening lyrics are “Young man, walk away from the hate. 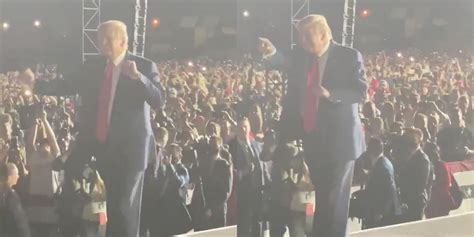 “As I’ve said before, @realDonaldTrump use is perfectly legal, so I won’t be suing the President. Shivers told The Post that he recently reached out to Willis to share his parody.